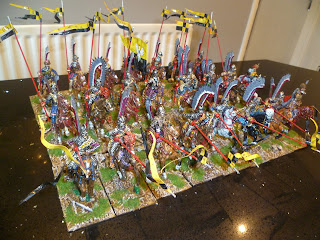 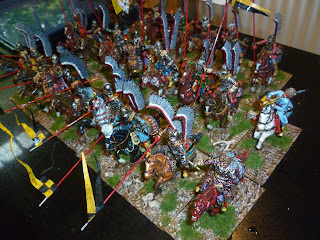 A short post this time, but at last I managed to complete the  Winged Hussar company. The pictures are not great as the bad eweather forced me to do the photography inside.
So here they are 23 figures plus bases finally finished, it seems like a lifetime has passed since these were started. 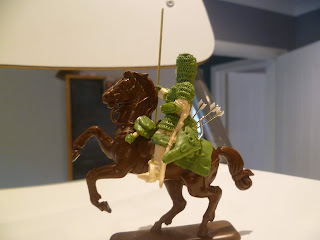 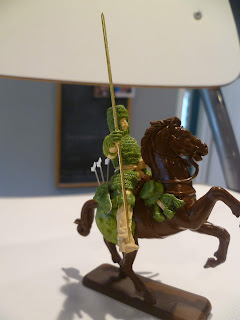 And so it goes on, I had a go at converting a Pancerni cavalryman, yes Stuart, it did take a shedload of greenstuff and sent my poor old eyes screwy, so am not intending to have many of these. At least that's end of the Winged Hussars, or is it?

How the Poles go Up and Down 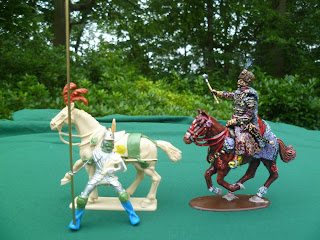 Back in the land of insanity. The chap on the right of this photo is the unit officer shown in the last post but now painted. The odd-looking fellow on the right is the last hussar needed to complete the company - the "Final Towarzysz"! 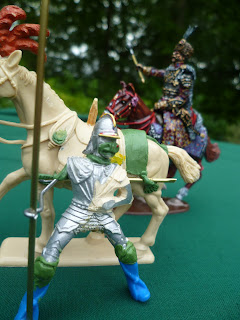 Here's a close-up showing the rather odd left arm where the shield has been cut away, and the even stranger right arm made from a bent paperclip which usefully gives quite a strong bond with the lance. The only greenstuff at this stage is the noseguard, around the neck and one the knee armour. 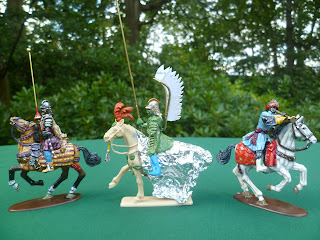 So this is our man having moved on a few stages. The armour has been "sculpted", the handguard on the lance has been added and the skirt of the jacket has been finished. I do the last bit with the figure mounted on his particular horse, but separated by a sheet of kitchen foil to prevent horse and rider becoming permanently (but not emotionally) attached, The foil can be peeled away when the greenstuff has cured. All I need to do now is add the sabre and its' straps. The wings are from brass tube with card (old business cards) fixed on with contact adhesive, the detail of the feathers will be painted on later - please see earlier posts.
To the right is the company trumpeter, almost complete, and to the left is the standard-bearer just waiting for his flag. The older I get the more I realise there are few standards left today. 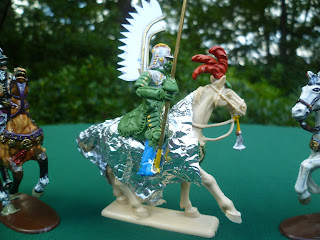 A close-up of the other side showing the animal skin and right arm built up with greenstuff.

I learned a few lessons during the process that might be useful:
1. On this last hussar I mistakenly cut his lance from brass tube instead of brass rod, brought about by drinking red wine whilst converting. But it is lighter then using rod, making the model more stable and it was easy to squeeze the tip to make a spearpoint.
2. The lance pennants are made from paper and are a devil of a job to fold around the staff and get the thin points to match accurately. I might use thin metal from say drinks cans next time.
3. Similarly for the wings, which might be stronger using thin metal.
4. Never do this type of model again.
Posted by Old Silly at 06:19 2 comments:

Following numerous requests, well one actually, to describe the process of producing the Polish Winged Hussars, here is the first of two posts that run through the procedure and highlight where things might have gone better.
First some early retaliation, these models are not entirely accurate, it would take me too long to produce figures that are exact copies of these spectacular troops, so I have aimed at something representational, the look of the thing, as a workable compromise. 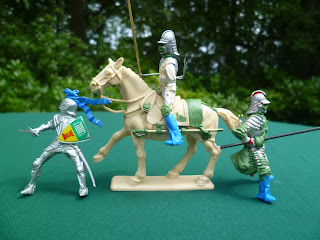 On the left is the raw material, a Britains Deetail knight. As an interesting aside I have
noticed that they all have slightly shrunken left legs. The middle mounted figure is showing the first stages of the conversion work, starting from the top, the head is removed and replaced with an English Civil War type lobster pot helmeted head. In this case made by Maros, sadly no longer available but others are available from Replicants for example. The shield is carved away and a gap opened up between the bent arm and the body. As I wanted the lance to be upright, I cut away the right arm and inserted a bent paperclip and glued in a lance made from metal rod (the material not the singer.) Two pins bent at right angles are pushed into the riders back, these will be used later to hold the wings. Finally the legs are cut off below the knee and replaced but boots cut from a suitable figure, in the case an old CTS Mexican. This is how I first noticed the shrunken left leg syndrome. I have also started work on the horse by extending the saddle cloth and fixing the Koncerz - armour piercing sword from rod and greenstuff.
The right hand figure is ready for painting, with armour and animal skin made from greenstuff. 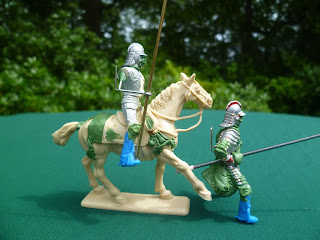 The view from the other side showing the paperclip arm this a loop at the end to secure the lance. The horse had had a powder flask and bullet bag added for the pistols. 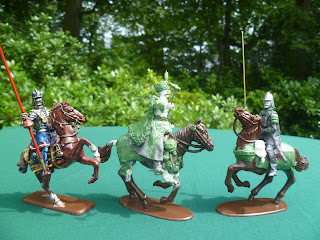 A couple of variations. the left and right hand figures are based on toys from Russia via Ebay. They are of a slightly earlier period so need some work to bring them into 1683 and the siege of Vienna. This involves new heads, lances and greenstuff armour and clothing. The wings and lance pennants are yet to be added. the one on the right is to be the unit standard bearer, hence the shorter lance. The right hand horse is Italeri, adapted as above, the other one is from Imex with an Ialeri head.
You really don't want to know about the central figre who will be the unit commander, suffice to say it has the body and head of a Replicants horse with the legs and tail from Imex. The officer has head and right arm fro Airfix, cuirass from Historex, lower body by Replicants, greenstuff and Milliput are also involved in some quantity and a whole lot of tears and cursing by me. 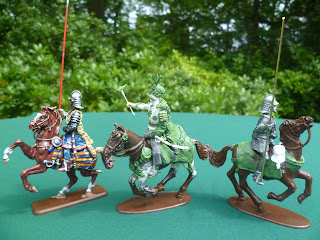 View from the other side.
Next time more on the armour and animal skin, plus the wings and lance pennants with the lessons learned.
If you want to stay sane, don't try this at home.................
Eric
Posted by Old Silly at 07:20 6 comments:

As the title shows, this little diversion started quite a few years back and as it seems I'm still suffering mass uniform painting aversion syndrome following the Waterloo extravaganza, the time seemed ripe to reawaken it.
Basically the aim of the first phase is to produce a "company" of Polish Winged Hussars as part of the relief force for the siege of  Vienna 1683. This will comprise 20 hussars, an officer, trumpeter and standard bearer that will form up in three ranks with the rear rank comprising the less well equipped "retainers".
Hopefully the pictures speak for themselves, but comprise drastic alterations to what mostly start out as Britain's knights with various (and time consuming) additions.
If people are interested I can run through the process in future blogs, please leave a comment and let me know.
Thanks
Eric.

A couple of people have asked for details on the figure conversions, so here goes for the Prussian infantry. They were originally ACW infantry from Accurate and Imex in the main. I struggled for references especially back views, so some of the figures rely on guesswork, also I am not (my son will disagree) a pedant over the details, if they look OK, that's good enough.
Firstly I beheaded them and cut away all the equipment, the helmet heads are by Irregular, they should have a square front peak...... but they look OK(?) Then I added standing collars, shoulder straps, cuff-flaps, ammunition pouches, haversack, water bottle and pack all from greenstuff. I also made a mess-tin from a wooden skewer and a short sword from Helmet spares. A coat of paint and job done!


The Danes were a bit easier, they are based on Replicants ACW marines originally issued with the Harpers Ferry set. They have the correct crossbelts and sort of "have the look". They were beheaded and a new kepi type head added along with a standing collar to replace the fall-down one, The height of the kepi was increased slightly and a strange cockade/button/cord arrangement added from greenstuff, Then haversack and canteen with straps again greenstuff with a sword as with the Prussians. That's it a coat of paint and away we go!
I hope this is of interest, please let me know, thanks.
Eric
﻿﻿
﻿﻿﻿﻿

In total I produced 40 figs, all conversions using a large quantity of greenstuff, and in the case of the Prussians, metal Russian Crimean heads from Irregular.
We premiered the game at the Little Wars Revisited Games Day in Woking last month, where a good time was hade by all!

Back from our hol's and some data 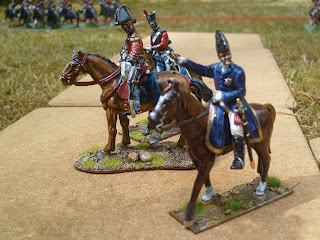 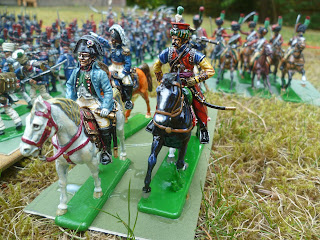 We have just returned from our holiday which explains the gap between this and the previous post.

Thanks to all those who viewed the story of our refight especially those who left comments, this post will hopefully answer some of the questions raised.

The figures are organised into companies, squadrons and batteries as follows:

Infantry - A company comprises an officer, NCO, musician and 20 men. A regiment (I have one French Line) has 6 companies, a colour party and two mounted officers.
Cavalry - 16 men, an officer and a musician make up a squadron. A regiment (I have one each of French Dragoons and Hussars) has two squadrons, a standard bearer and escort, and a mounted colonel with trumpeter.
Artillery - A battery is three guns with a total of 12 gunners and an officer.

All the figures are painted in good old, actually some of them are not so good anymore, Humbrol enamels. There's no real trick to the way I paint, I usually go from dark to light, so a face would be painted brown first, then a flesh tone, leaving some brown around the nose, mouth and eye sockets with a final highlight in the nose, chin and cheeks. Practically everything has this three colour treatment. And yes black horses are highlighted in blue!

Rules.
Given the number of figures involved (around 1300) I wanted something simple and easy to operate. Given my usual consummate planning skills I finally "wrote" the rules the night before the battle.
All distances, movement, weapon ranges etc. were in "feet" that is our feet heel to toe, large boots might lead to an advantage or two?
For each unit I devised a rating score based on ten factors:
1. Elite - Guards, Rifles etc.
2. Status - Veteran etc.
3. Morale level
4. Resilience
5.Competence - Drill, weapons handling etc.
6. Physical condition
7. Specialist weapons - Lance, rifles etc.
8. Specialist equipment - Cuirass for example.
9. Level of training.
10. Reputation

So we then scored each factor out of 10, giving a possible maximum of 100. Through out the day each unit had its' factor rating adjusted depending on what was occurring, so heavy casualties for example would reduce the overall score. Once a unit reached half its' starting total it had to withdraw two whole moves.
Firing was decided by simple dice throws, so we threw lots of dice.....

Lessons learned.
We needed two players a side to help with moving the troops, despite the large number of figures on each base, time started to run away from us. Any volunteers out there????
I need to devise another way of sticking figures to card bases. we used PVA and it really stuck, it really stuck.

We had a lot of fun and laughed at some of the strange events, what next? well perhaps a bigger version in 2019?

Thanks, hope this helped.